Dropped my contribution to the Art Gallery for Art for the Heart that benefits Center for the Arts in Corvallis. I am not sure if the show will be an actual physical one or online only like many others. I haven’t been to the place since way before the pandemic, and it was so nice to walk in and enjoy the current show and new things in their gift shop. It was almost normal. Almost.

Three 5” x 5” drawings make the “Delicate Beginnings” little series. It would be four, but the forth one became a casualty of forgetting to cover the ink drawing with final fixative before attempting to mount it on top of the tissue paper with pastels and powdered bone. It will require heavy touch-up and maybe adding some color to the foal. I am not sure about color yet, but it’s a possibility. Maybe all four would benefit from some color.

More details about the show: https://theartscenter.net/call-for-artists-8×8-art-gallery-for-art-for-the-heart/

The Art for the Heart 8×8 Gallery is going up in the Corrine Woodman Gallery tomorrow.

Virtual Reception
The 8×8 Gallery reception will be held on October 1, 2020 at 6 pm online. It will be the first chance to purchase any artwork in this gallery.
Register for Art for the Heart by clicking here. Registration is free. Also visit The Arts Center’s Facebook page by clicking here for more info.

Decided to make progress with the horse first and with the window frame later. Both are going to differ a bit from my reference, and because the horse is more important I am going to figure out where his colors end before touching the window. I am now debating between natural wood and old paint that would compliment the horse.

So it was a good idea to use graphite first, then continue with color on top of it. Maybe a softer grade like H6 would be more efficient, especially on a textured paper like this one. The disorganized colors that are already there are from different kinds of strokes I tried to see what works better.

Back to the unfortunate horse who is now ready for color! I am done with the graphite underdrawing (if this is not a word it should be) and securing it with a workable fixative. Let’s see if that speeds up adding darks with colored pencils. Rainy shooting conditions made it look like there are at least two different tones of graphite, but in reality it’s the same tone.

I don’t think I have ever been this excited to see a rough drawing of a horse head finally appearing on a piece of paper as planned. There were at least two iterations that were not to my liking at all, but finally everything is where it should be, the sketch is transferred to the final watercolor paper (it’s a Strathmore one with nice slightly uneven surface), and I can move on to preliminary shading with graphite.

The horse is picking out of a barn door window, but it is barely visible right now. I need to decide whether to keep it white like in the reference photo or make it natural wood. The horse is going to be light chestnut with a lot of color nuances in the face, and even weathered white seems to be too stark next to all that, so most likely I will use some kind of amber or light wood for the window.

Miscalculated where the horse should go on the piece of paper, but otherwise happy with the sketch. The subject was a beautiful chestnut, most likely a resident of the horse boarding facility across the street from our home in Cupertino, CA.

Despite several amazing finds among drawing apps and all niceties they offer, I find myself again with a piece of paper and a graphite pencil. Must be a habit.

I wanted to finish this one yesterday and make it my last horse drawn in the departing year of the Horse, but of course that didn’t happen. So let it be the first horse of the new year with many more to follow.

I want to thank you all for following me and supporting my art and wish you all the very best in the new year 2015! 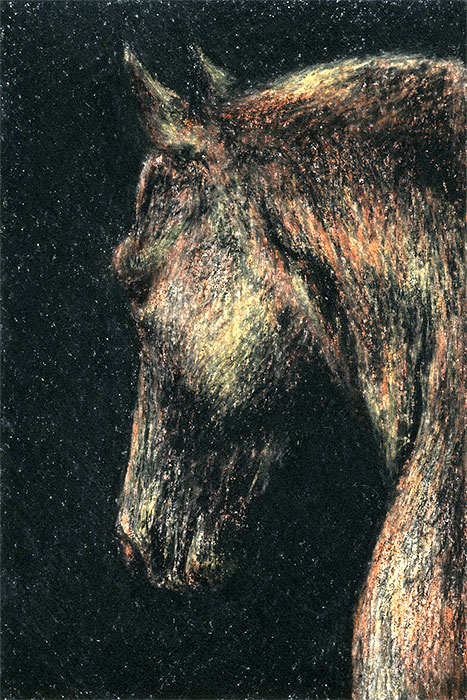